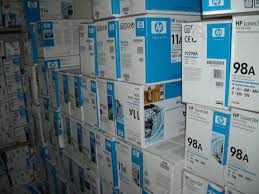 Okay so we’ve been in the game for a while now and there always seems to be one reoccurring theme out there for Original Cartridges; Why are you so expensive I was quoted by another company 50% cheaper than what you quoted me. Why are you trying to rip me off?!?! To which we reply gobsmacked “Sorry but who quoted you so low?” they always get quite cagey at this point not willing to reveal who they got the quote from and that always tells us that; A: They are trying their luck to get a cheaper price. Or B: They know that something may not be on the up and up with this company that quoted them.

It’s tough because companies out there are trying to save as much money as possible so are going for the cheapest quote, but BEWARE “If it sounds too good to be true it probably is!!” The companies quoting such cheap prices are selling for waaaaay cheaper than even the suppliers are willing to sell to us. Surely this should set some alarm bells off people! If companies are undercutting even the distributors what could be happening? Because cartridges are zoned they can’t import them from America and Europe at cheaper prices because they wouldn’t work in our printers here in South Africa the chips wouldn’t let them.

Recently a nice man who we quoted wanted to know if we buy in empty cartridges and we said yes the going rate to buy in your empties so we can remanufacture them and sell them as Remanufactured cartridges with no OEM branding on them is roughly R15 plus or minus. He said, “Oh it’s okay I sell mine to a company that gives me much more if I give them the original box!” DING DING DING HELLOOOOOO PEOPLE!!! Why would there be a company out there wanting your empty cartridge with the box?? Why would anyone want your box if not to reuse it and sell your cartridge as an original. I mean, the prices out there are ridiculous and people somehow feel they are getting a great deal when what is really happening is they are being screwed and all the legitimate guys out there are also being screwed out of sales. Do I sound a bit bitter! That’s because I am! The situation is always reversed in the clients eyes though and we are the ones trying to screw them over.

One of my employees used to live in Athlone and he tells me there is a stationery store out there that is selling supposed Original Cartridges for cheaper than what we are selling our refills for. How is that humanly possible as our refill prices are half or most of the time less than half of the original price! And these fraudulent companies out there are quoting government departments and the government departments are just lapping it up thinking they’re getting a great deal. I beg you out there use some common sense, if you get quotes and 9 out of 10 companies are quoting around the same figure and there is one lone company selling cartridges sooooo much cheaper I can guarantee you there is something fishy going on! You’re not getting a good deal, you’re getting screwed!

A lot of Chinese suppliers are also selling cartridges that look identical to the original cartridges. HP seized two years ago a boat load of counterfeit cartridges here in South Africa. Now I don’t want to get myself into trouble but misquoting but it was something like 20 million dollars worth of fakes! Still think you’re not being screwed?

I hope we have all learnt a valuable lesson today which is not to think with your wallet when buying Originals but to make rational decisions based on the information given. Or you can just go right ahead and buy our remanufactured cartridges that are not masquerading as originals because that is against the law. Save some money the proper way and come to Cartridge Emporium where we will walk you through what we do and how we do it.

Kyocera TK-17 toner Cartridge at Cartridge Emporium. Help us to save you money and  save the environment at the... read more

We at Cartridge Emporium mourn the loss of Nelson Mandela a true liberation hero. To most of us he... read more

Why The Major Manufacturers Are Lying to YOU

Why all the Fear? The big manufacturers are conspiring against you. How? You may ask. I've noticed manufacturers like Hewlett... read more

Ink Cartridges Cape Town Buy all your ink cartridges at Cartridge Emporium. We sell the widest range of cartridges in... read more